Warning: We’re wading into the shallow end today. Read at your own risk. 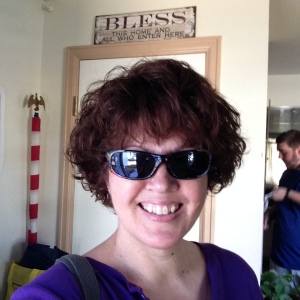 My hair, my hair. I know I’m not the only one, but I am sure fickle about my hair. When it’s short, I wish it were longer. When it’s long, I wish it were shorter. When it’s fluffy, I want it less so. And so on. My likes and dislikes of it are fairly extreme. The weird thing is that the days I think it looks great, no one compliments me. But on days when someone does compliment me, it’s when I thought it was kind of meh. So either everyone else is delusional or I have no idea what actually looks good upon my head. As much as I wish it was the former, I’m assuming it’s the latter.

I’m not excessively vain or crazy into selfies. But I do take some shots of my hair kind of often. I think it’s because I’m trying to figure out what works and what doesn’t. The weird thing is that when I look back sometimes at pictures where I thought my hair wasn’t so great, I actually like it better after the fact. Clearly, I really don’t know what I’m thinking when it comes to my hair.

But I do know this. Every time I get it cut shorter, I get complimented. When it’s longer, I never receive compliments. Recently, I’ve been trying to get the photo mess on my iPhone cleaned up. Apparently 6,100+ is too many for my 16GB phone on top of the other stuff which resides there. Go figure. Anyway, in going through the pictures, I made a little effort to look more at my hair. Good grief, this is sounding terribly narcissistic. Nevertheless, I’ve gone this far, so I may as well keep on going.

I’ve decided that I agree with the people at large. I look better with shorter hair. It’s spunkier, funner (yeah, I know), and just all around better. So I guess it’s time to lob it off once again, but this time, it’ll probably be here to stay. Well, not stay, actually. 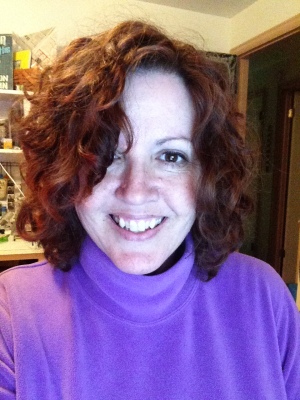 One of the reasons I grow it out is so that I can put it up in a clip or pony tail or headband. I don’t even know why any more. I think it’s because I used to like doing that, but really, when it gets long and I do that, I get tired of having to do so, since it’s otherwise a ridiculously big mop on my head which gets in my face. Not only that, the grays seem to be encroaching on the sides of my head nearest to my face. Therefore, when I pull it up, they’re no longer hidden. I just haven’t yet made peace with them, so I keep coloring them and they keep growing in too fast, especially around my face and I have to keep hiding them. Thus, no more hair pulling up, back, or in a headband.

So as soon as the budget will allow, the fun spirals and their less spirally friends are destined for the salon floor.

And if you stuck with me this far, thank you. Now you know just how vain and shallow I can be. Mostly just about my hair, though. Plus you get to see one of my epic bedhead shots. Lucky you!