Somehow my sister had the misfortune of being called Lassie when she was younger. Only by Mom and me. I think. It was her lovely, blonde, Farrah Fawcett hair, I suppose, which prompted thoughts of Lassie’s lovely, blonde, flowing hair, er… fur. It was all in fun, anyway. Not like we thought of my sister as a brave, brilliant dog, or anything. Cause we didn’t. And she’s not. A dog, that is. 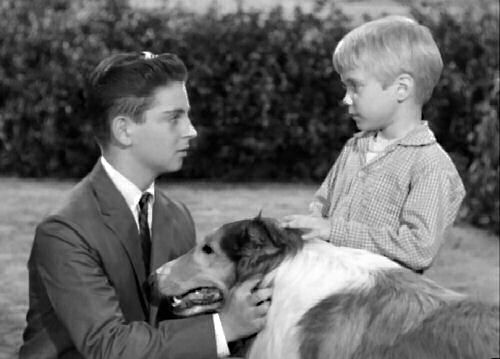 In the fourth season, after the Millers acted as a foster family for a seven-year-old named Timmy for the summer, Gramps passed away. Ellen needed to be in the city where she could give music lessons and Jeff could attend high school. Knowing the city was no place for a big dog who was used to running free, Jeff left Lassie with Timmy. Courtesy of lassieweb.org

One day she was at a friend’s house (we’ll call her Betsy*) and it would seem her friend knew about the Lassie moniker, because I called  Betsy’s house and a female voice answered. The female voice sounded like Betsy, so the following conversation ensued:

Me: Is Lassie there?

Me (realizing that perhaps this is NOT Betsy after all): Um, is Susan** there?

Fortunately for me we did not have Skype or FaceTime or any other such video phone devices since it was back in the dark ages and all. How incredibly embarrassing and ridiculous I sounded while speaking to Betsy’s mother who did not know that my sister was nicknamed after a dog.

* name changed to protect the innocent.

** name not changed as that’s my actual sister’s actual name, not her dog name.